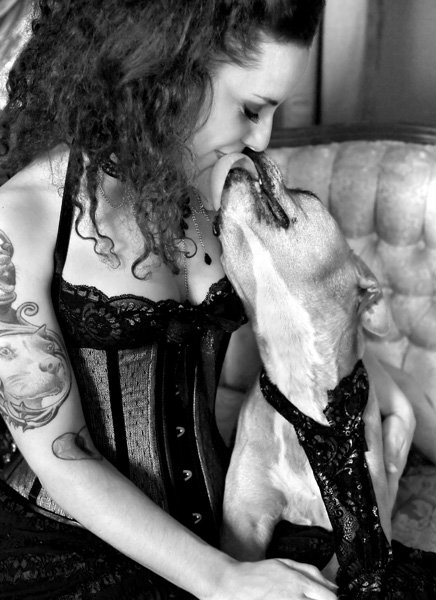 Little Darling’s Pinups for Pitbulls, Founder Deirdre Franklin talks about the organization and her inspiration, the late, great, “Carla Lou”.

I had a horrifying experience the other day in Enumclaw, WA.  I was walking my puppy Sherman when a lady told me, “Pitbulls are banned here, make sure you say he’s a boxer mix!”  In that moment, Breed Specific Legislation (BSL) became a reality to me.  It became more than an offensive meme on Facebook.  I felt fear strike through my heart, my dog was in danger!  People could outlaw my dog, take him and destroy him (right here in America!) and there was nothing I could do about it.  They could tell me that I couldn’t live in a certain city, that we aren’t allowed.  I choked down my terror and anger at senseless discrimination, finished what I had to do and got out of there.

Deirdre Franklin, founder of Pinups for Pitbulls, had an even more heart wrenching introduction to BSL.  In the mid 90’s she was volunteering at her local shelter in Pennsylvania, (mostly for daily access to doggie hugs, she freely admits).  A lady brought in a Pitbull type mix that she had found as a stray.  The shelter informed her that if she turned over the dog, she would be euthanized.  They had a “Kill Pit Policy”.  Deirdre had never had any experience with the breed.  She walked her into the back rooms, enthralled with the wiggly happiness of the dog! She decided to do whatever it took to save her.  She tried to adopt her, the shelter refused.  She called all over the country trying to find a rescue that would “pull her” from death row.  She finally found a group in Texas willing to help.  The shelter told them, “No.”
“I couldn’t believe it!  This dog was going to die just because she’s a pit bull.  How unfair and closed minded.  I was devastated,” Deirdre remembers.  Determined to bring a rescued Pitbull into her home, she convinced the Texas rescue to adopt a dog to her.  They flew the dog (sight unseen, save for a blurry photo taken in a dark barn stall after being abandoned in a basement and rescued) to Pennsylvania.  When she met Carla Lou at the airport, it was love at first sight.  They became the best of friends, living all over the country together.