We are a publicly funded, 501(c)3 Non Profit. Your donations and purchases of our merchandise are what help to fund us each year. Please consider making a donation today.

Pinups for Pitbulls, Inc. (PFPB) was founded in 2005 by Deirdre ‘Little Darling’ Franklin. Deirdre was tired of finding that so-called rescues and shelters were euthanizing healthy, friendly, and adoptable animals due to their alleged “breed,” and so she utilized her background in modeling and education in fine arts to create a calendar like no other–eye-catching pinup girls and their pups, paying close attention to detail and era appropriate style along the way.

Since 2005, PFPB has continued its progress and has grown exponentially into the internationally recognized organization it is today. Deirdre’s initial vision and mission has remained intact, however her passion for animals and her ability to capture an audience has enabled PFPB to reach people across the world.

PFPB is a 501(c)3 not-for-profit organization whose mission is to educate people about the history, temperament, and plight of the pit bull-type dog; raising awareness to rally against Breed Specific Legislation (BSL) and Breed Discriminatory Laws (BDL). PFPB’s goal is to restore the image of the pit bull-type dog to its former reputation of America’s companion animal, war hero, and family member.

Through Deirdre’s ever-growing team of volunteers in over twenty states, PFPB has been able to host educational seminars, community outreach initiatives, and fund-raising events throughout the United States, Canada, and even reaching to Europe. In its educational crusade, PFPB hopes to end discrimination, abuse, and the unnecessary killing of pit bull-type dogs around the world–all the while dreaming that one day, PFPB will no longer be needed.

The Pinups for Pitbulls Team is not just another group of pretty faces. We are animal lovers, advocates, educators, and a force to be reckoned with. Not a member of our staff will give up on our work until we are no longer needed. With your help, we are hopeful that this time is just over the horizon. 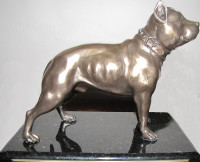 Pit Bulletin Legal News (PBLN) is pleased to announce that the winner of this years Wallace Award and recipient of a generous grant from the Wallace Foundation is the founder and driving force of Pinups for Pitbulls, Inc., Deirdre “Little Darling” Franklin.

PBLN was presented with the Wallace Award to Deirdre at the Dec. 5th release party for the 2016 Pinups for Pitbulls calendar in Philadelphia, PA. PBLN presents this annual award to the individual that brings the most positive attention to pit-bull-type dogs and generates an atmosphere of change throughout the year.

Every year, Deirdre works both personally and through her group throughout the country, educating people on the devastating effects of breed discriminatory laws, as well as promoting responsible dog ownership. A champion of the human-canine bond, Deirdre travels to many events where this sort of information is not usually presented, such as Comic Cons and tattoo conventions, in addition to many pet expos and adoption events. In this way, Deirdre is able to reach a remarkable number of people to create awareness of the issues surrounding breed discriminatory laws.

Through her organization’s beautifully orchestrated calendars that pair pinup style photography with gorgeous dogs, the dogs and people who are helping change things for the good have a chance to be highlighted and recognized for their advocacy work.

Deirdre exhibits science based, factual knowledge in her advocacy. She earned her Masters degree in public policy and wrote her thesis on breed discriminatory laws. The research and knowledge she gained during this process marries educational depth to the entertainment provided by her organization.

In 2015, Little Darling’s Pinups for Pitbulls reached the shelves of Barnes & Noble and the subsequent book tour garnered attention to these issues that might not have otherwise reached people. In 2016, she co-authored The Pit Bull Life with esteemed author, Linda Lombardi.

Over all, every year, Deirdre reaches thousands upon thousands of people, bringing positivity and change.

Deirdre is the founder, President, and soul behind Pinups for Pitbulls, Inc. (PFPB). Having founded PFPB in 2005 , Deirdre tirelessly and unselfishly works to remain educated, current, and ready to combat Breed-specific and discriminatory laws. Deirdre has graduated from Drexel University and has obtained a master’s degree in Public Policy to add to her arsenal of discrimination-fighting knowledge. She has extensive experience with animal rescue, having been on the frontline after Hurricane Katrina in New Orleans, during Hurricane Sandy in NJ, and through her years of volunteer work with animal shelters and rescue organizations.  These include ASPCA BRC, Asheville Humane Society, HSUS, and Pet Rescue of Mercer. Deirdre worked as a foreclosure mitigation counselor and mediator up until she decided to expand her work with Pinups for Pitbulls, Inc. full time.  She resides in Asheville, NC with her survivor Pomeranian Pepita O’Possum.

Carla Lou is the true founder and inspiration for PFPB. Having been abandoned by her abusers in a Texas basement at age 1, Carla Lou (or “Mookie Sue” as she is affectionately called by her closest friends and fans) was rescued by Chako.org and was Deirdre’s best friend, confidant, and the inspiration for much of PFPB’s custom-designed merchandise. Carla Lou was a true spokes model and ambassa-dog for PFPB, she showed everyone that came into her wiggly path nothing but kindness and kisses, embodying a true pit bull-type dog through and through. Carla Lou was a constant inspiration, and a reminder of the love a human can share with a dog. Carla Lou passed away on August 20, 2012 at the age of 18. She is buried at Hamilton Pet Meadow in New Jersey. She loves visitors.

Note: Chako.org founder, Dawn Capp is one of the main people interviewed in the film ‘Beyond the Myth’ that Pinups for Pitbulls, Inc. sponsored.

Jeffrey is a Board Member, Treasurer, Shipping Coordinator, and overall financial guru for PFPB. Having an extensive background in finance, banking, and accounting, there is no better man for the job of Treasurer and Financial Manager than Jeffington. He earned his BBA in Finance & Business Management from Temple University and has an AA in Bank Management. Jeff also does most of the heavy lifting, inventory, and is a Team Leader at most our events. He is also our resident tattooer in our booth and donates a portion of every tattoo to PFPB! Look for Pitbeartattoo on social media! He has been a musician for for over three decades and helps to coordinate a fun and organized atmosphere at all of our events. He resides in Asheville, NC.

Rachel is a Board Member and former Shipping Coordinator for PFPB. She manages our online auctions and is our longest tenured Team Leader.  Rachel has a long history of working with animals of all species and creeds, having worked for years as a veterinary technician prior to opening her own business, Mahallah Dog Grooming. Rachel is a true Jill-of-all-trades, dedicating her time to rescuing many homeless animals, volunteering at events and educational programs nation-wide, and starting PFPB’s initial shipping headquarters.  In her “free” time, Rachel is a singer and songwriter. Rachel resides in Pennsylvania with her husband Jason and numerous fur-babies.  Rachel was our Carla Lou Award Winner in 2013!

Nancy Sue is the Volunteer and Events Coordinator at Pinups for Pitbulls, Inc. and the primary Volunteer liaison for us. She has a BA degree from Rutgers, Camden College of Arts and Sciences and manages a boutique law firm in South Jersey. Her organizational skills have helped her to become a relied upon asset to Little Darling.  She has been instrumental in developing PFPB’s national and international team of volunteers for both in-person events and our street team.  Her interaction with people as a Ballroom, Latin and Swing dancer and dance instructor have helped her become a more knowledgeable and patient animal advocate.  An animal lover since birth, she adopted a vegan lifestyle believing that to be her path to true animal advocacy.  She and her husband share their lives with Brock, their handsome pit bull type dog. Nancy was our Pinup Of The Year Award Winner in 2014!

Stacey is a Volunteer and the Texas area team leader for PPFB.  She has become the primary mentor and the primary example of what we look for in our Team Leaders.  Stacey has been a foundational driver of our online auctions and our strongest developer of new sources of revenue.  Stacey was born into a family of animal lovers and adopted her passion for animal advocacy from her sister, who is also an animal advocate.  Adopting her pit bull mix, the late Lucy ( aka The Chupacabra) , she witnessed firsthand the joy and love these dogs bring and the discrimination and  negative perceptions of them. She became a volunteer with PFPB  in 2009, and has produced and worked on events from coast to coast to educate the public and lend a voice to the wonderful dogs who cannot speak for themselves.   Stacey studied Fine Art and Fashion Design at University of North Texas and El Centro College and works as a practice manager for a Texas surgeon group, in addition to designing clothing and jewelry.  She also provides hair, makeup and costuming for the film industry. Her hobbies include art, travel, and creating metal sculpture.   Stacey lives in Dallas, Texas with her recently adopted pit bull mix, Miracle. Stacey was our Pinup Of The Year Award Winner in 2013!

Sandra is the primary legal liaison for PFPB. She is an attorney in Pennsylvania and New Jersey, with her main focus on law with compassion – animal and family law. Long before law school, Sandra knew she wanted to use her skills and education to do more for animals in need. Having adopted her first pit bull-type dog, Stella, from Animal Control, she knew she needed to do everything she could to be a voice for those who cannot speak out against cruelty and discrimination. Sandra has a bachelor’s degree from the University of Pennsylvania and a Juris Doctorate from Rutgers University. In addition to attending and organizing events with PFPB nation-wide, Sandra teaches “Animals and the Law” courses at Rutgers University and assists PFPB with various legal issues. Sandra resides in Pennsylvania with her husband Greg, and their three rescued dogs: beagle mix Maverick, pit bull mix Ruby-Lu, Chibbs, a pocket terrier mix, and their daughter.