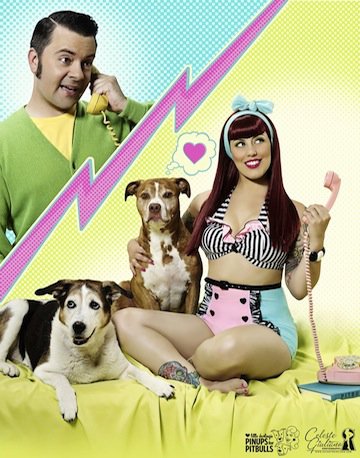 Yardley-born Deirdre Franklin has always had a soft spot for American pit bull terriers, Staffordshire bull terriers and other dogs described, collectively, as pit bulls. Since 2005, when she launched her nonprofit, Pinups for Pitbulls Inc., she has been doing everything in her power to undo the negative stereotypes surrounding these maligned dogs, which have been victimized by breed-specific or breed-discriminatory legislation—i.e., breed bans—that have placed them squarely in the crosshairs.

The nonprofit was inspired largely by the late Carla Lou, Franklin’s longtime pit bull companion who passed away in 2012 at the age of 18. Franklin’s experience in New Orleans, where she helped rescue abandoned animals in the aftermath of Hurricane Katrina, also motivated her to go “all in.”

“I realized all the dogs in the makeshift shelters there were pit-bull-type dogs, which are popular in a lot of impoverished regions,” says Franklin. “Their owners couldn’t get back to them, and it didn’t seem fair to me. I decided to do a pin-up calendar to raise some awareness. … I had no idea people would care as much as they have.”

In 2015, the Pinups for Pitbulls calendar (now available) will celebrate its 10th birthday. Thanks in part to the expertise of two of Franklin’s longtime collaborators—photographer Celeste Giuliano and graphic artist David Seidman, both of Philadelphia—the calendar has become Pinups for Pitbulls’ greatest source of funds.