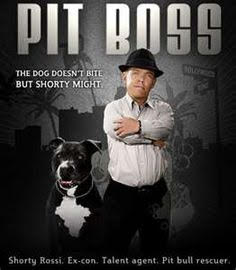 The “Four Feet Tall and Rising” author and reality TV personality will be at Vato Cigars in Binion’s Gambling Hall onSaturday, February 6, 2016 starting at 6:00pm.  Shorty Rossi will participate in a Fundraiser with his rescued dogs, Francis and Nicola.

Shorty Rossi, a little person who rose to fame on Animal Planet’s “Pit Boss” for six seasons, has been working in film and TV for more than 15 years, landing roles as mini-Andy on “The Andy Dick Show” and a bully in “Disney’s The Kid.” The 46-year-old entertainer previously spent 10 years 10 months and 10 days in prison on charges in a gang-related shooting, but then turned his life around and dedicated his life to being an advocate for his favorite breed of dog, setting up the organization Shorty’s Rescue to help rescue and rehabilitate pit bulls. www.shortywood.com

Pinups for Pitbulls (PFPB), a nonprofit founded in 2005, works tirelessly to end the unnecessary killing of Pit Bull-type dogs and to educate people about Pit Bulls and the flaws of breed-specific legislation. Every year, PFPB also releases a stunning calendar that pairs women with darling Pit Bulls, a feel-good purchase that harks back to the first half of the 20th century, when these dogs were viewed as war heroes, and pin-ups were all the rage. www.pinupsforpitbulls.org
Cigars for Warriors is a 501(C)(3) charity that focuses on collecting and dispersing premium cigars and accessories to American service men and women serving in combat zones. www.cigarsforwarriors.org
Support Us
We are a publicly funded, 501(c)3 nonprofit. Your donations support us each year. Please consider a donation today.