Forget what you know about horror conventions and music fests because we’ve got news for you. MassConcerts, New England’s largest indie concert promoter is bringing you the 11th Annual Rock & Shock – the only event of its kind in the Northeast.
We were the first to blend horror conventions with music. So while fans can meet their favorite horror film stars, directors, writers and bands during the day – at night we have well-known national bands performing each night next door at The Palladium…That’s why this event is called Rock & Shock.The live music takes place at The Palladium and DCU Center. Bands that have played in the past have included Rob Zombie, Alice Cooper, Gwar, Misfits, Insane Clown Posse, Meshuggah, Type O Negative, Turbonegro, Mushroomhead, Wednesday 13, God Forbid, DevilDriver, The Haunted and others. 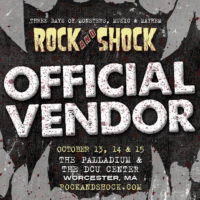