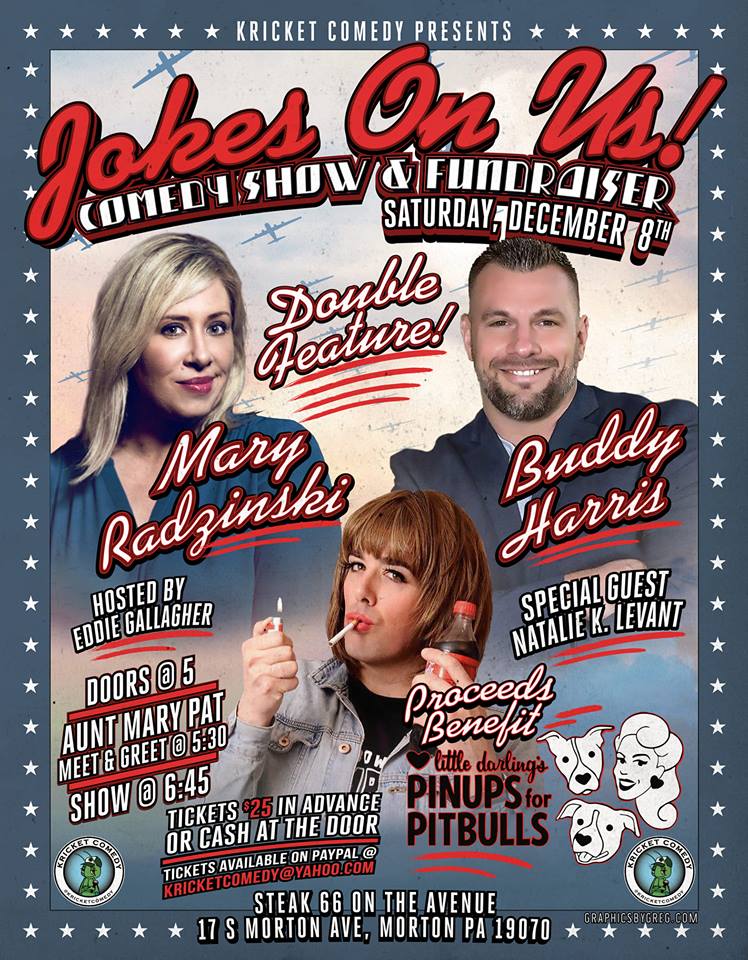 Jokes On Us! Comedy Show and Fundraiser

Tickets are available in advance at KricketComedy@yahoo.com on PayPal – Please use the ‘Sending to a friend’ option to avoid any fees.

Tickets can also be purchased at the door – CASH ONLY

Come meet Pinups Marlisa Beatty (Miss September 2019) and Kate Hoiser (Miss July 2019). Pinups for Pitbulls, Inc. is a 501(c)3 not-for-profit organization whose mission is to educate people about the history, temperament, and plight of the pit bull-type dog; raising awareness to rally against Breed Specific Legislation (BSL) and Breed Discriminatory Laws (BDL). PFPB’s goal is to restore the image of the pit bull-type dog to its former reputation of America’s companion animal, war hero, and family member.

Aunt Mary Pat DiSabatino- Aunt to all, mom to some, wife to one! She’s the fun Aunt that you love having to the family parties! Born and raised in Ridley Park, she is extraordinarily DELCO! She loves Philly sports, Wawa and Partying! She always has an opinion on something, but don’t worry hun she ain’t judging! Don’t get started about her job, because she always has a story to tell about her shifts at Acme! Make sure you check out her weekly videos, and come grab a beer with her sometime!

Mary Radzinski is a regular feature at Helium, Goodnights, Cap City, and Punch Line comedy clubs. She’s been fortunate to frequently open for comics including; Dave Attell, Jim Norton, and Sarah Colonna, along with many other national acts. She opened for Jim Norton’s “Contextually Inadequate” comedy special taping at the Somerville Theater, as well as Rosie O’Donnell’s most recent HBO comedy special at Levity Live. Mary can also be seen on TruTV’s new series, Greatest Ever.
Her debut album, “Discomfortable” is now available on iTunes, GooglePlay and Amazon.

Buddy Harris grew up a fan of stand up, with a dream of one day performing. That dream became a reality late in life though, when he made a pact with his 6yr old daughter, in an attempt to inspire her to overcome her fears. Since then, he has hit the comedy scene running, working clubs in LA, Chicago, all over the east coast and opening for acts like Jimmy Shubert, Rich Vos, Joe Materese, and Dustin Diamond. Being divorced and a father of 3 daughters, Buddy attacks modern day family life with an energetic and relatable style.

Natalie K Levant is a legend in her own mind. She started doing comedy several years ago when the AARP turned her down for a membership. You can find her performing regularly in Philadelphia, New Jersey and Delaware. She is a favorite at The Comic Strip in NYC and has won a number of competitions, including Comic Cure, March Maddness and the Northeast Comedy Cabaret. Check out her Tastelessdiva.com website. She is available for consultations about aging gracefully and refuses to wear white pedal pushers, anything that even looks like a bow, dockers and she’ll never back into parking spots. She has had an intimate relationship with her microwave for 25 years. Her comedy heroes are Richard Pryor, Buddy Hackett and Robert Schimmel. Her favorite words after a show, ‘never stop’. Her main goal in comedy is to disgrace her family.