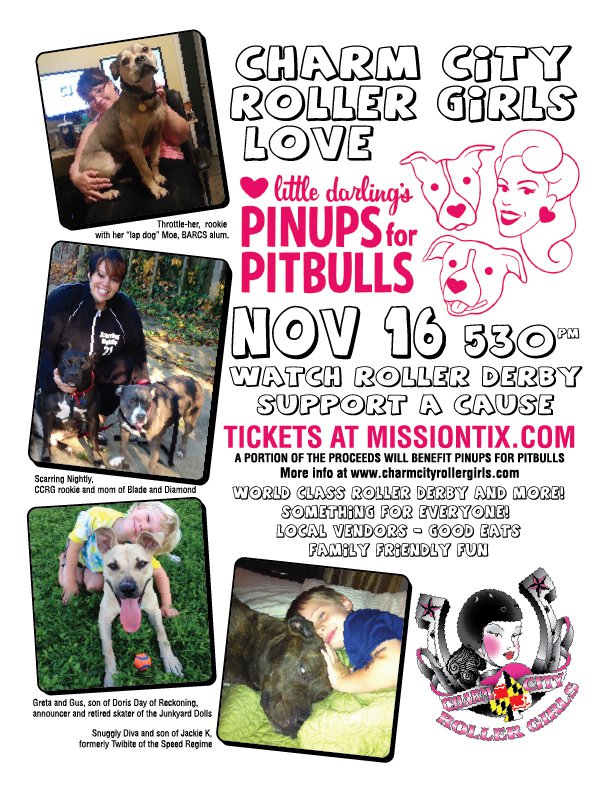 BALTIMORE- On Saturday, November 16, 2013, The Charm City Roller Girls’ and the D.C. Roller Girls’ home teams face each other for a charity doubleheader whose proceeds, in part, will benefit Pinups for Pitbulls, a nonprofit organization working to rally against breed-specific discrimination and legislation.

In the opening bout, Charm’s reigning Home Team Champions, the Junkyard Dolls, go to battle against D.C.’s Majority Whips. Even though the Whips are D.C.’s largest home team, bringing tons of skill and experience to the table, they may have a tough time with the Dolls, who have not been defeated on home turf since February 2012. It is no secret that the Dolls have become Charm’s strongest home team by defeating challengers from all over the country; however, their weaknesses still stem from a penalty heavy jammer corps. And with the Whips ready and willing to capitalize on any vulnerability the Dolls may reveal, fans will certainly be treated to a game filled with thrills and spills.

The tale of two cities continues as CCRG’s Night Terrors challenge D.C.’s Cherry Blossom Bombshells. This is the most highly-anticipated pairing of the series thanks to the fact that these are the only Charm/D.C. teams that have a heated history. In their last meeting on January 29, 2011, the Bombshells took an early lead only to succumb to the Terrors’ defense in the second period, 112 to 67. It was a bittersweet battle that placed the Terrors on the road to an undefeated season and left the Bombshells plotting revenge. Expect a no-holds-barred rematch as D.C. fights for redemption and the Terrors work to prove their prior success was justly earned.

Join the action at the Clarence “Du” Burns Arena, 3100 Boston Street. Doors open at 5:30 p.m. The first bout is at 6:30 p.m. with the second game starting around 8:00 p.m. This event is family friendly and wheelchair accessible. Tickets are available at the door for $15, but patrons can save money purchasing online at www.missiontix.com; kids 5 to 12 are $5; general admission is $12; VIP tickets are $25. Street parking is plentiful and paid parking lots are within walking distance of the venue.

The Charm City Roller Girls (CCRG) is Baltimore’s only all-female flat track roller derby league. CCRG is a member of the Women’s Flat Track Derby Association and is proudly skater owned and operated.